Chapter 1 - Towards a Zero Waste Nation

Chapter 2 - Keeping Our Resources Within A Closed Loop

What is Circular Economy?

How do we manage waste sustainably?

Chapter 6 - Shaping A Greener Future With Science And Technology

Chapter 7 - Towards A Zero Waste Nation, Together

Despite Singaporeans’ love for food, households are one of the largest generators of food waste, contributing around half of the food waste generated in Singapore.

According to an NEA study in 2016-2017, each household disposed of 2.5 kg of avoidable food waste each week. Rice, noodles and bread were among the most commonly wasted food items.

The amount of food waste generated has grown by almost 30% over the past 10 years and is expected to rise further with a growing population. In 2018, food waste made up onefifth of the total amount of waste disposed of in Singapore, but only 17% of food waste was recycled.

There is hope for improvement. The study also found that more than half of the food waste could have been prevented if people were more mindful of how much food they bought, ordered or cooked.

WHY WE SHOULD NOT WASTE FOOD

Food is an essential and precious resource. Singapore is exposed to the volatilities of the global food market as we import over 90% of our food supply. As we work on strengthening our food security, everyone also needs to play a part by reducing food wastage.

By reducing food waste, we can also reduce the contamination of recyclables, giving recycling a boost.

The best way to manage food waste is to avoid generating it from the outset.

The NEA has also collaborated with different organisations, including private organisations and schools, to raise awareness of food waste reduction through educational materials.

Where there is unsold or excess food that is still suitable for consumption, consumers and food establishments can donate them to food distribution organisations such as The Food Bank Singapore, Food from the Heart, Willing Hearts and Fei Yue Community Services.

But what about unavoidable food waste that needs to be thrown away? With today’s technology, we can adopt a circular economy approach by viewing food waste as a valuable resource. Food waste can be converted into products like non-potable water, liquid nutrient, compost and biogas for energy generation.

To kickstart the roll-out of such systems, the NEA conducted a pilot project at a hawker centre at Block 628 Ang Mo Kio Ave 4 Market in 2016. It was found that active participation and support of stallholders and cleaning staff were crucial to the success of the project.

Apart from harnessing useful by-products from food waste, recycling food waste can save money too. At OTH, food waste is converted into organic fertiliser, which is used at its rooftop Eco-Community Garden and distributed to members of the community at the end of each month. This has contributed to annual savings of about $40,000 from the reduction in daily waste disposal charges as food waste is no longer disposed of as general waste.

Companies looking to put in place food waste minimisation projects, including the implementation of on-site food waste treatment systems, can tap on the NEA’s 3R Fund.

In 2016, the NEA and PUB conducted a pilot at Ulu Pandan Water Reclamation Plant where food waste – segregated at source from general waste and deposited in dedicated food waste bins – was collected from 23 locations and mixed with used water sludge. The combined food waste and used water sludge undergoes a process called anaerobic digestion, where biogas is formed through microbial activity in the absence of oxygen.

The pilot found that co-digesting food waste and used water sludge can triple the biogas yield as compared to digesting used water sludge alone, thereby enhancing energy generation. The NEA and PUB will be working together to implement the co-digestion process at the upcoming Tuas Nexus, where the NEA’s Integrated Waste Management Facility is co-located with PUB’s Tuas Water Reclamation Plant. 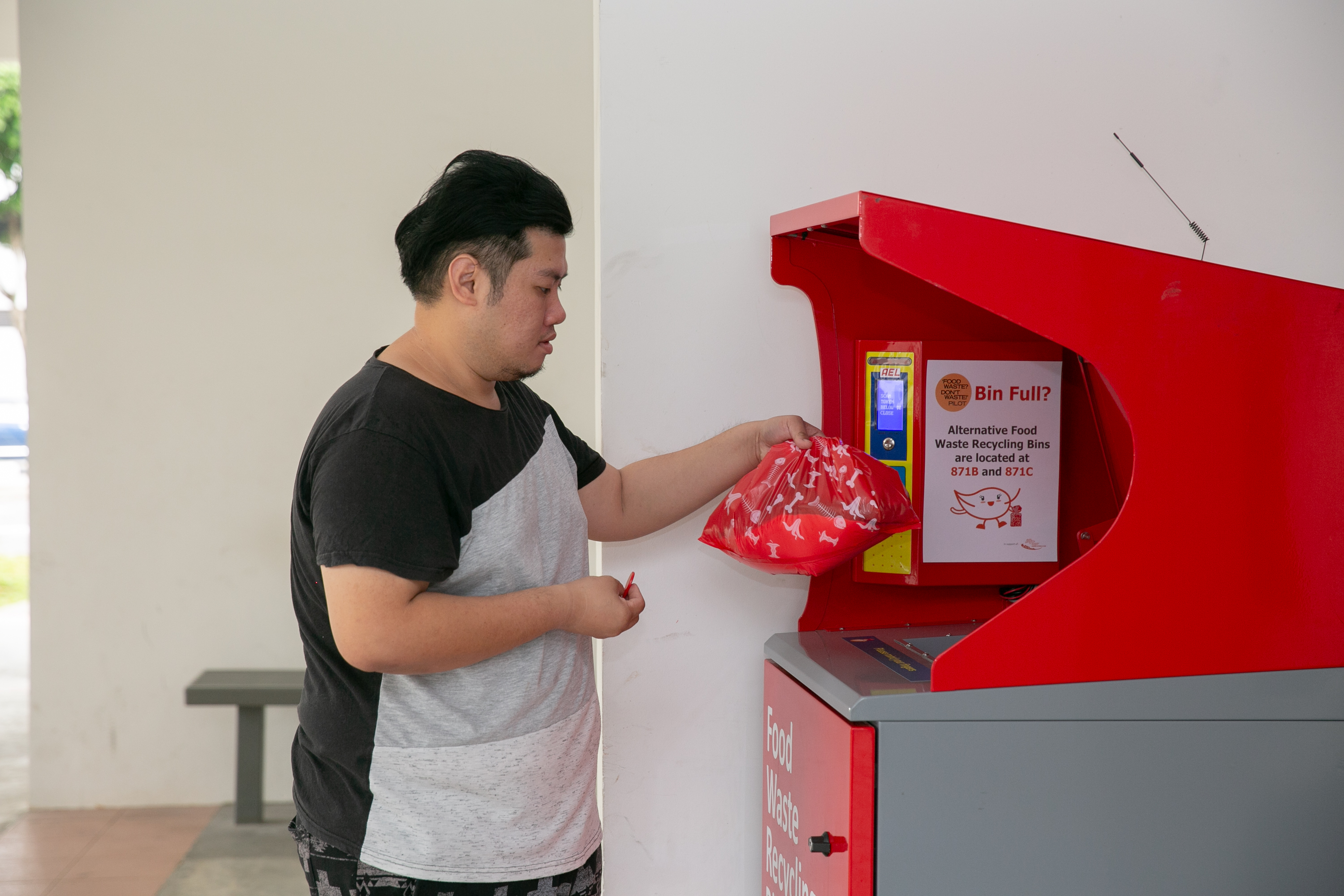 To gather insights on household routines to encourage households to segregate food waste for treatment, the “Food Waste? Don’t Waste!” household food waste segregation and recycling pilot was conducted by MSE and the NEA, in collaboration with OTH, the People’s Association (PA) and the Tampines Town Council.

Since 1 August 2018, households in the Tampines GreenLace HDB estate were provided with information on how to separate food waste, as well as food waste caddies and bags to collect their food waste. Residents were asked to bag their food waste and deposit them into food waste recycling bins located at the foot of their block. The food waste collected was then sent to OTH for treatment.

The pilot has yielded valuable insights on food waste generation and disposal behaviours and it has helped increase awareness of food waste recycling amongst the residents of GreenLace by more than 23 percentage points to 82% after three months.

To build upon this awareness following the pilot, we have partnered Zero Waste SG to engage the residents and explore ways of making their journey towards zero waste even more meaningful. Some possibilities include fully closing the food waste loop within GreenLace via composting in a community garden. We will continue to work with the community for more opportunities to reduce food waste. 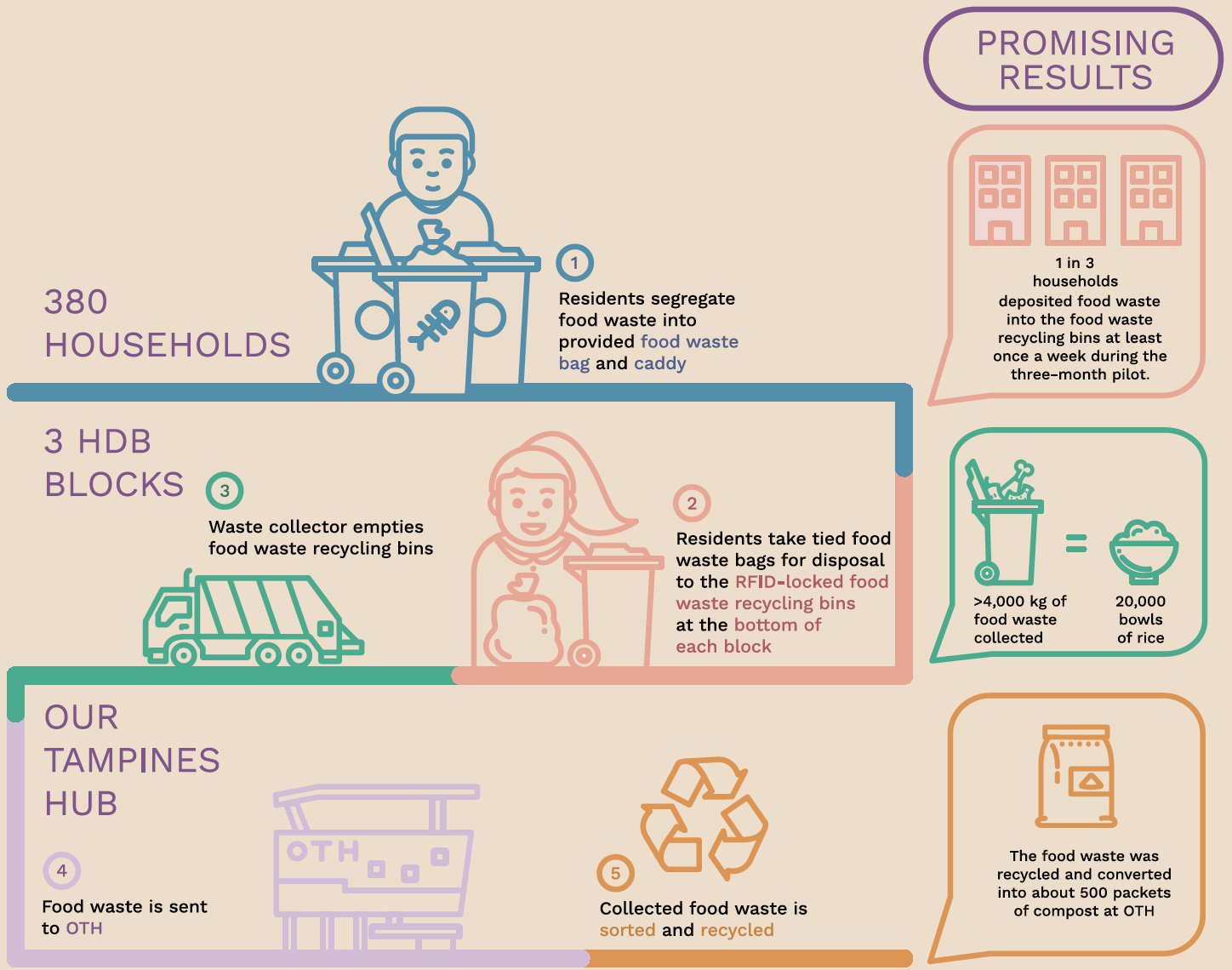 Discarded food is not simply waste to be incinerated. Instead, as shown in the examples above, there is potential to turn them into useful products.

Therefore, under the Resource Sustainability Act, we will be making it compulsory to segregate it for treatment. 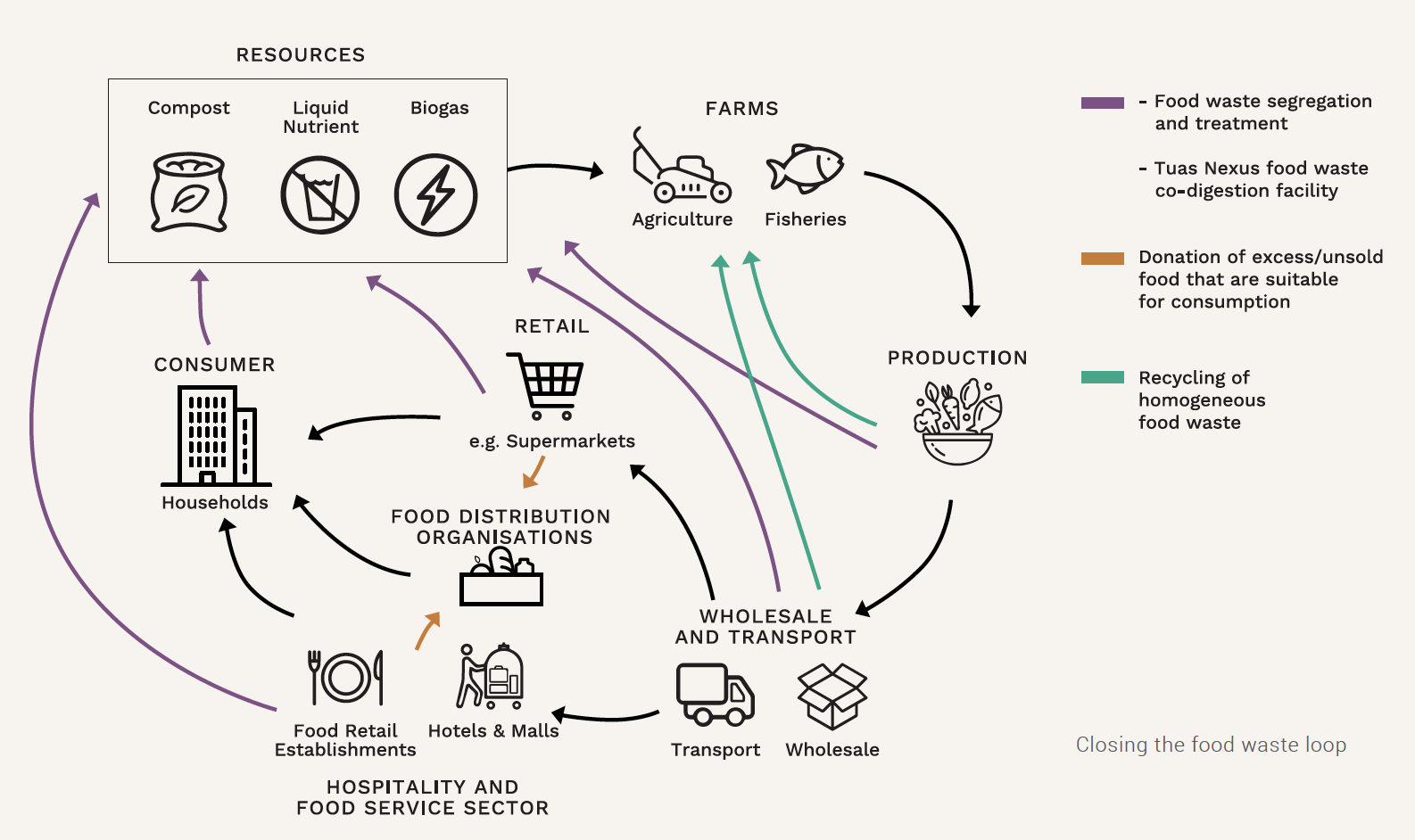